I.  Just and Unjust Political Power in Christine’s Time

Writing in a time of political turmoil, Christine de Pizan often reflects in her works on the nature of political power, how it functions within the structures of a state, how it is distributed, and how to exercise it.  She authored explicit political treatises such as The Book of the Body Politic and The Book of Peace, important texts in the “Mirror for Princes” genre; in other works, such as her biography of Charles V, she addresses political power more implicitly.  This session seeks to explore late medieval views of just versus unjust political power, not only in Christine de Pizan but also in the thought of her contemporaries.  The papers in this section may (but are by no means required to) draw parallels with contemporary notions of just and unjust political power.

The independent scholar Susan Groag Bell, who passed away in 2015, was a forerunner of many of today’s medievalists who focus on the study of women’s writings and lives.  Of specific interest to Christine de Pizan scholars was her final book, The Lost Tapestries of the City of Ladies:  Christine de Pizan’s Renaissance Legacy, which explored the late medieval and Renaissance reception of Christine through tapestries owned by influential women (such as Elisabeth I, Queen of England, and Anne of Brittany, Queen of France).  Inspired by Groag Bell’s scholarship, this session is dedicated to the exploration of material objects – manuscripts, incunabula, tapestries, and so on – in which Christine de Pizan’s legacy persisted through the late medieval and into the early modern period.

We are happy to confirm that the 10th Christine de Pizan International Congress will be held in Paris, at the Sorbonne Nouvelle, from the 18th to the 21nd of June 2019.

As it has been announced in a previous circular, the theme of this meeting will be:

This meeting aims to examine the way in which Christine de Pizan evokes and inscribes the theme of filiation in her texts; first of all, her own filiation as a daughter and as a mother. Other filiations, literary and fictional, are added to biological filiation: from one work to another, new processes of genesis and generation are built or invented and, with them, new ‘fathers’ and ‘mothers’ emerge, as new alliances for the widow she is.

These filiations (real or imaginary, matrilineal or patrilineal), as well as their hierarchy, will be analysed. It could be interesting to explore how these relationships are preserved when they are no longer based on flesh, and what the ideological implications of this kinship are.

We will also address some of Christine de Pizan’s apparent contradictions, such as the promotion of virginity and chastity, frequently found in her works, and the importance given to lineage; the promotion of herself as an author and the failure to claim rights for the “daughters” she is addressing.

The concept of filiation is also central for the reflexion on texts and the way they were created and transmitted: papers can thus focus on the different versions, and the filiation between them and the late copies, reworkings, and translations.

They can also study the filiation between text and images in the different copies, or their relation with the images of the late manuscripts.

Last but not least, filiation may suggest new lines of research on language on different levels, especially the syntax (the genesis of sentences) and the lexicon of Christine de Pizan’s works (e.g., the creation of neologisms from Latin and Italian to French).

Languages of the presentations will be French, English and Italian.

Presenters are asked to respect a twenty-minute limit. Organised sessions (4 papers maximum) or round tables are also encouraged.

We invite you to submit your abstracts to christine.de.pizan.2019@sorbonne-nouvelle.fr.
Abstracts should not exceed 500 words (exclusive of references), and should list 3 to 5 keywords. The deadline for submission is 15 September 2018. The abstracts will be reviewed anonymously by members of the Scientific Committee on the basis of the originality of the work, chosen methodology, writing quality and the overall contribution to the field of Christine de Pizan’s studies, and notification of acceptance will be sent out by the 15 December 2018.

Session Title:  Christine and the Arts:  Aesthetics and Poetics in the Writings of Christine de Pizan

A trend in Christine de Pizan scholarship has been to emphasize her status as a writer of social commentary and as a moralist; this trend has a tendency to deemphasize the importance Christine attributes to art, beauty, and artistic creation.  This session of papers will offer a corrective by taking a broad approach to Christine de Pizan’s appreciation of the arts and to the principles of aesthetics, explicit or implicit, that emerge from her works.  The session will be open to explorations of the poetics that Christine evokes or implements as guiding principles of her literary creation, to examinations of Christine’s views on the visual and performing arts, and to papers that place her aesthetics and poetics within Classical, Medieval or modern theories of art and beauty.

In the spring of 1418 the Burgundian faction in the French civil war took Paris from the control of the Armagnac faction, which had controlled the city for the previous five years. Because the Burgundians were allied with England, and the then-dauphin Charles (later crowned Charles VII and the eventual victor of the Hundred Years War) was allied with the Armagnac faction, many scholars have come to view this conflict in partisan terms, as a massacre followed by an occupation. This session of papers seeks to understand the complexity of this episode in the French civil war and the larger external war into which it was subsumed both on the part of those who experienced it, and on the part of those who later conferred meaning upon it. We welcome contributions from the fields of literature, history, music, art history, religion. Papers might speak to the experience of the violence, memories of the events of May-June 1418 in texts and works of art, the diplomatic and military implications of the Burgundian takeover, the place of these events in subsequent historiography, the particular trauma produced by civil conflict, or other. The session of papers will seek to situate the events of 1418 with respect to broader issues related to violence exercised within a community, the figure of the witness, the burden of survival, and the experience of exile.

The late medieval expansion of devotional practice across western and central Europe—exemplified perhaps by the Modern Devotion and the Brethren of the Common Life—has often been linked to the use of the vernacular, which was growing in prominence in both religious and less religious genres. Scholars have noted the importance of this vernacular theology, both as a discourse outside of scholastic Christian theology and as inflected by the vernacular literary cultures of its participants. However, comparatively little attention has been paid to how the vernacular literary cultures influenced “traditional” modes of doing theology in Christian Europe. This panel seeks to address this lacuna by attending to two giants of the late medieval era: Christine de Pizan and Jean Gerson. These two writers, who engaged with each other in the notorious querelle over the Rose and joined in praising Jeanne d’Arc, stand as Middle French authors steeped in the contemporary literary currents of their day and also active theologians engaging with scholastic and philosophical-theological texts. This panel, a standard session of papers with time for questions, seeks papers that probe the relationship between theology and vernacular literary culture in late medieval Christianity, in the immediate context or Christine and Jean’s oeuvres or in other comparanda.

The Society will sponsor two sessions. Session topics are:

Please consult the University of Louvain-la-Neuve website for updates

The Society will sponsor two sessions and co-sponsor one session with the Alain Chartier Society. Session topics are:

* This is a different title than the one discussed at Kalamazoo

(Annual Business Meeting for the NAB-ICPS will be held at 6:00 PM, East Ballroom, Bernhard Center)

The Society will sponsor one session and an art exhibit/reception at the International Medieval Congress at Western Michigan University, Kalamazoo, Michigan, May 14-17, 2015

Dinner in the City, Reclaiming the Female Half of History: Christine de Pizan’s Book of the City of Ladies and  Judy Chicago’s The Dinner Party – Marsha Monroe Pippenger 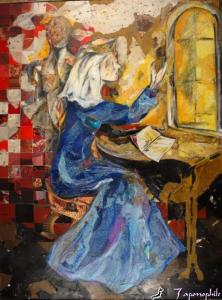 2 thoughts on “Calls for Papers”